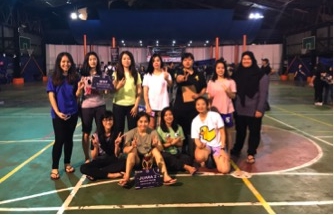 Untar.ac.id/fikom – Untar’s basketball team succeed in achieving Abas Champ 2017 “Shoot Through Your Limit”. This national universities basketball championship was held at Unika Atma Jaya, Jakarta, on 6th-15th September in Atma Jaya Semanggi Campus Sporthall. In the final match, male team surpass the 17th August 1945 University with score 62-45 and became a champion. While the female team achieved runner up after recognizing the exellence of Universitas Negeri Jakarta and finish the match with score 42-51. Steanlie and Bella Sthefani were awarded as Most Valuable Player (MVP) to complete male’s team trophy. The team’s triumph which was trained by Nina Yunita Nurman is a proud achievement and strengthen the integrity of Untar’s Basketball Team as the strongest university team in Indonesia. According to a player Anashtasia Irawati, this achievement elevates Untar’s Basketball Team in ranks of Indonesian elite teams. “In midst of our student daily busy life, we can still practice and become a champion, it is surely an effort that should be proud of.” according to Anashtasia, Chairman of Students Activity, previous Untar’s Basketball League period. Plus at the same time the Basketball Team Untar also faces the Student Basketball League (Libama) Jakarta. Congratulations for Untar’s Basketball Team and students who achieved MVP Title!