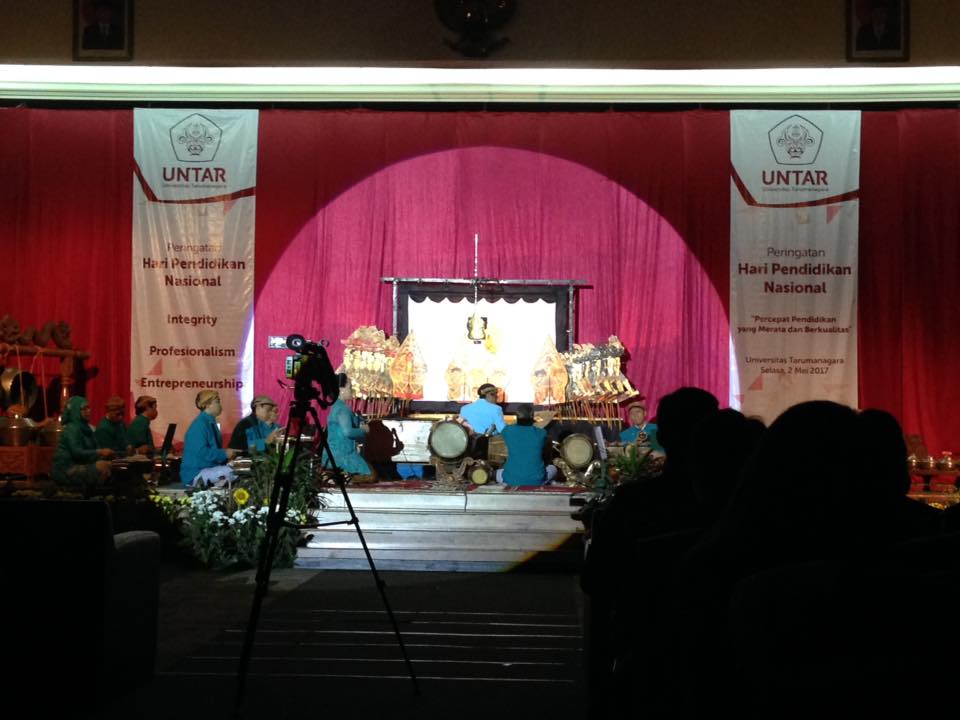 The National Education Day (Hardiknas) 2017 on Untar felt special. Unlike the previous event, This time, it is filled with the performance of student’s skil from Department of Civil Engineering Bagoes Respati to puppeting. Bagoes performed the “Hanuman Duta” shadow puppet show in front of the Tarumanaga Foundation leaders, university leaders, lecturers, students and employees attending the Hardiknas celebration on Tuesday (2/5) at the auditorium. Student of Civil Engineering of FT Untar learns to play at Redi Waluyo studio since junior high school. Many young people now love the outer cultures, Bagoes admits to choose the traditional culture. He is interested in learning puppeteer because since childhood, he often invited his father to watch the puppet. “Wayang is the nation’s cultural heritage that must be preserved”, said Bagoes who still wants to continue to learn about the world of wayang. In addition to Wayang Kulit on this occasion also entertained by the presence of the magic performanceby Shoteby Winsen from the Department of Industrial Engineering and Edward of the Department of Civil Engineering FT-Untar.   The Rector, Prof. Dr. Agustinus Purna Irawan, considers cultured education an important thing. According to him, The development of science and technology should also include elements of culture in education on campus in order to become a superior person. Untar supports various student activities to achieve both academic and non academic achievement. Students was given the opportunity to channel their talents and interests, especially concerning the preservation of the nation’s culture. At Untar campus itself has a karawitan art activity unit as well as various activities related to other arts and cultures. Even in every graduation, the campus always displayed a performance of Indonesian culture.