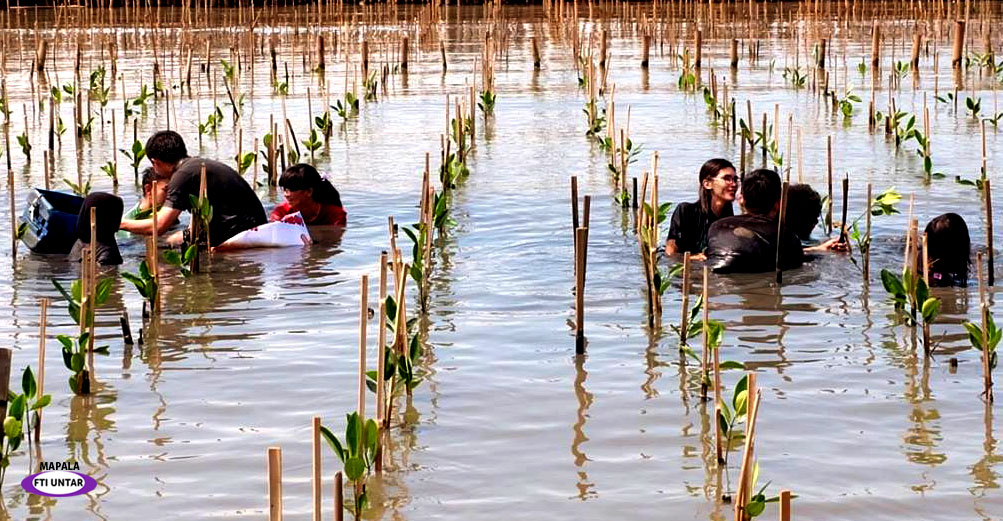 Mangrove forest is a forest which located and grows in brackish water and affected by the ebb and flow of the sea. Mangrove has an important function, such as to protect the shore from the erosion and abrasion. Mangrove also protects the residents from storm and wind. Recently, most of the people do not consider and speculate the after effect of mangrove exploitation, it makes the environment lost their preservation. For that reason, MAPALA (FTI’s organization in nature) has been moved to do a social charity with “Mangrove & Our Future” as the theme.

This charity was held on 27th – 29th May 2016 in Jadimulya Village, Gunung Jati, Cirebon, West Java. In this event, they got an explanation and socialization about the way to plant a mangrove correctly. The participant was separated into two teams, the one who plant and the one who tied up. The plant team in charge to plant the mangrove while the bind team was in charge to tied up the planted mangrove with a rope.

Teuku Fachrudin as the head of LSM Pang Laot Yudha Putra said, “We could protect our territory without weapons. Protecting our land is one of the ways to protect our nation. Each year our land has been subsided through abrasion. If we do not act now, then we will lose our islands in Indonesia one by one.” On the other hand, MAPALA FTI also held a donation charity to Jadimulya Village and Budhi Asih Orphanage. In this charity, most of them donate some of toys and books. In the night, they held a barbecue with Jadimulya residents enthusiastically.