The Meaning of FIKom UNTAR for Us 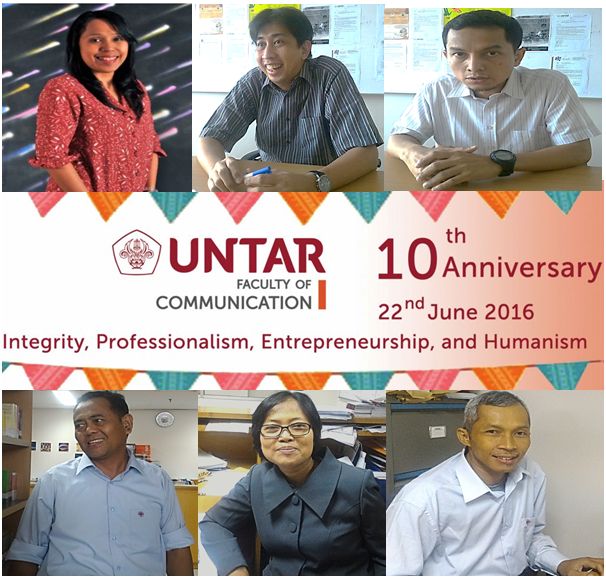 Exactly today, June 22, 2016, FIKom UNTAR celebrate ten years anniversary. A decade has passed, Fikom UNTAR has its own meaning and hope from its members.

“The Meaning of FIKom UNTAR for me is where I developed, supported to develop myself optimally. If I can finish my s3 education because supported by Fikom UNTAR. In terms of social life, this FIKom UNTAR  is unique. There are various lecturers from a variety of characters and interests. I got the communities where we build a second family, there are ups and downs, but this is FIKom UNTAR family. I hope that this becomes a better family, each member can support each other to develop their potential optimally, build on each other strengths and weaknesses and try to tolerate a positive contribution from all the experience in the past. Already so many good things that there could be energy to be better,”

“For me, FIKom UNTAR is a place to share knowledge and sources of life. Hopefully in the future FIKom UNTAR more based, contribute and benefit the community,”

“FIKom UNTAR is where I serve, to work and to practice what I have in order to live more useful to society. Hopefully Fikom UNTAR could become a point of emergence of new ideas, useful and better for the progress of communication itself into an institution that can compete with similar institutions. FIKom UNTAR’s Culture that we feel internally, it may also be felt by other institutions not only in Jakarta but also outside Java. Because Fikom UNTAR culture is unique, there is kinship here and humanist values,”

“FIKom UNTAR is where I learned, hopefully more advanced and could go internasional,”

“Hopefully Fikom UNTAR more came forward and the kinship of FIKom be better,”