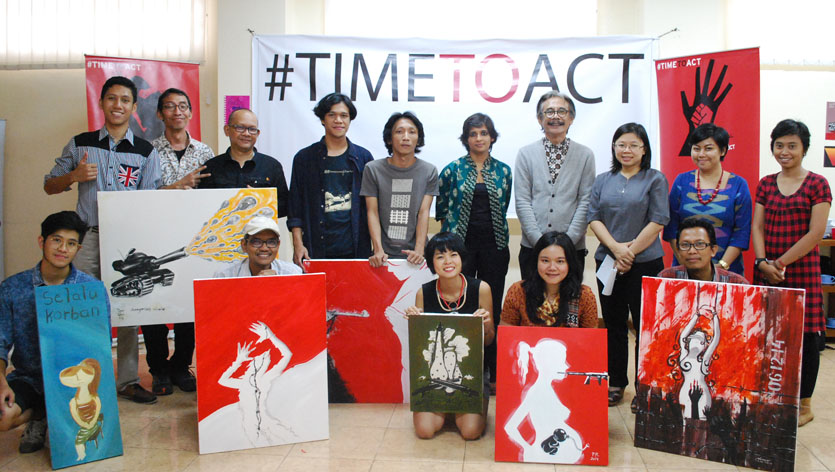 On July 10 to June 13, 2014, the UK Government organized the Global Summit to End Sexual Violence in Conflict Areas. The event was attended by 1700 delegates from 129 countries. The event was led by the Foreign Secretary, and Angelina Jolie as the Special Envoy of the UN for UNHCR, the UN Refugee Agency. This meeting was to discuss the lives of women who are victims sexual violence in areas of military conflict, some of which are Africa, Latin America, and Asia, including in Indonesia. One important part of of the big event was the Global Relay Event, in the form of a creative worldwide 84 hours of participation which was coordinated via the Internet. on June 11, 2014 UNTAR Faculty of Art and Design has been invited by the state institution National Commission on Violence Against Women (or often referred to as the National Commission for Women) and the United Kingdom Embassy in Jakarta to launch the art campaign in the form of collaborative painting in the National Commission for Women. The collaborative painting involved team of lecturers, students, and UNTAR Faculty of Art and Design alumni, including Toto M. Mukmin, Nasir Setiawan, Yuli Asmanto, Francisca Retno, Hendra Bakti, Yudha Bianto, Aldo Muhamarizka, and Shienie Valleria, led by the Untar Faculty of Art and Design Dean Mr Muchyar. The event was opened by the Commissioner of National Commission for Women Andy Yentriani, as well as the chairman of the Political Section of the British Embassy Millie McDevitt. Through video, visual artist Tim UNTAR Faculty of Art and Design  also briefed British Foreign Secretary and Angelina Jolie, regarding the problem of sexual violence against women in conflict areas around the world. The entire collection of Faculty of Art and Design Untar (FSRD Untar) team was shown at the Embassy of the United Kingdom in South Jakarta on June 20. British Ambassador Mark Canning expressed his appreciation for the works. The event was closed by the Ambassador, and Commissioner of Komnas Perempuan. Some of the pieces were donated to the National Commission for Women. As a community service activity, the involvement of FSRD Untar showed the outreach and involvement of visual art and design in humanitarian and social issues. [vc_column width=”1/1″][vc_empty_space height=”32px” el_class=”Jarak Media Sosial”][/vc_column][vc_row][vc_column width=”1/3″][vc_facebook type=”button_count”][/vc_column][vc_column width=”1/3″][vc_tweetmeme type=”horizontal”][/vc_column][vc_column width=”1/3″][vc_googleplus type=”” annotation=”inline”][/vc_column]