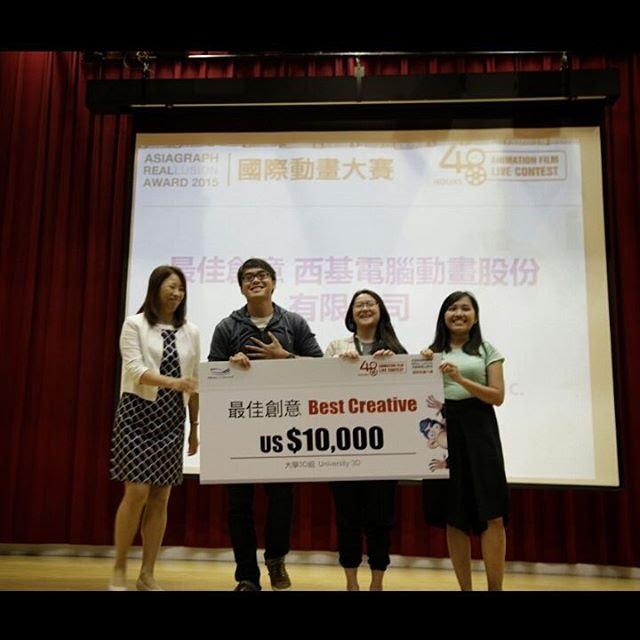 Champion ‘The Best Creative’ category in Asiagraph Reallusion Award 2015 in Taiwan. Design Communication Visual team of The Faculty of Art and Design (DKV-FSRD) Tarumanagara University (Untar) succeded to bring Indonesia name in The Competition of Asiagraph Reallusion Award 2015 in the category of “The Best Creative” and competent won the prize of 10.000 US$. The team consisted of three students with name Sandi, Regina, and Cindy Octaviany with the supervisor Sonny Adi Purnomo, S Ds. Untar DKV participated in the live contest for 48 hours in Yuan Ze University, Taipei, Taiwan, on 25-27 August.
The 2D and 3D animated film participated by the DKV Untar team is one of the year prestigious activities of the regional level specifically for the collage students and the high school students since 2010. The total prize for graps is 66.000 US$. The participants were selected in each country, and only those who pass the selection dispatched to compete for 48 hours in Taiwan. DKV Untar team and the one other university succeed to pass the competition represent indonesia, as the finalist with 19 other participants from various asian countries, such as Malaysia, Thailand, and Japan. The works of short animated clip entitle “Self Image” designed through the effort of the students team DKV-FSRD Untar with the team name “Terimakasih Production” for 48 hours in the process. In the end “Terimakasih Production” is able to defeat 19 teams and one tough opponent who defeated was team “Bang-Bang” of Tokyo University Of Technology-School of Media Science, a team of guidace Kenji Watanabe (Ken Waternavi) CG Director leading Jappanese movie “Ultraman”. This victory surely will be the spirit of the beginning of the development of multimedia specialization in Visual Communication Design Studies Program in the Faculty of Art and Design Untar, the success representing Tarumanagara University who declared himself to be the flagship universities in Southeast Asia. In the national scope, this victory the initail capital with hugh potential for education design and multimedia, considering the animation industry nationwide into one of the leading sectors in the creative economy wich is currently being intensified by Jokowi’s government through the establishment of the Creative Economy led by Triawan Munaf. (FSRD Untar 2015) [vc_column width=”1/1″][vc_empty_space height=”32px” el_class=”Jarak Media Sosial”][/vc_column][vc_row][vc_column width=”1/3″][vc_facebook type=”button_count”][/vc_column][vc_column width=”1/3″][vc_tweetmeme type=”horizontal”][/vc_column][vc_column width=”1/3″][vc_googleplus type=”” annotation=”inline”][/vc_column]