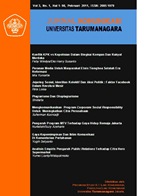 KONFLIK KPK VS KEPOLISIAN DALAM BINGKAI KOMPAS DAN RAKYAT MERDEKA Febi Windya/Eko Harry Susanto Abstract: This article discusses the frame differences between Kompas and Rakyat Merdeka when both of them were exposing the conflict of KPK-Police (Gecko versus Crocodile). Kompas daily likely considers it a problem of humanity, while Rakyat Merdeka daily seems to scrutinize it representing the interests of the people, ideology, and business. The author concludes that sometimes it is very difficult for media to become objective and avoid taking side in publishing a certain conflict. Keywords: framing, conflict.

Abstrak: Minority media, such as the Suara Baru magazine, always play significant role due to their importance in bridging the communication gap between the underrepesented ethnic group and other communities. The Suara Baru magazine was initially designed as an internal publication of the Association of Indonesian-Chinese (INTI), but later on it also publishes other common issues. The author who conducts a content anaysis over the media believing that such a publication can become a gizmo in eradicating wrong stigma regarding Indonesian-Chinese population in this country. Keywords: minority media, Indonesian-Chinese. Jejaring sosial, identitas KOLEKTIF DAN

Abstract: Today, global society is facing the era of social media. One of the most mentioned social networks that draws attention from all over the world is facebook. In term of the revolution in Egypt, most of Egyptian people believe that Facebook plays very significant roles in winning their revolution. How exactly facebook could be that important in the process of this revolution, becomes the center of this paper. In its analysis, this paper focuses on the Khaled Said facebook, where critical consciousness was built, collective identities were changed, the realm of Egypt was reconstructed, actions were planned and maintained. The author also underlines that how far a communication technology bringing about the changes for human-beings so much depends on the actors of revolution. The actors in this case, are the constructors of reality, i.e. the people. Keywords: social media, facebook, Egypt revolution, critical consciousness.